So I have finally finished putting up the beds and added the decorative capping to the edges over the weekend. (New Year New Garden update) I don’t know if it actually needed the capping but we had already bought it and it does make it easier to lean across the beds with something to rest your hand on. The back garden is still a disaster area – just a little fancier disaster area now. The beds and all dirt filled surfaces are covered in wire in a futile attempt to combat squirrels’ excavations.

Now for the big challenge, I have to fit all the vegetables and fruits I am currently growing under lights in to the space I have allocated. I have a feeling there are going to be quite a few ‘grow bags’ dotted around the back garden to manage the overflow of plants.

I am looking at planting out with intercropping – a method that means you plant different size or shape plants next to each other so as to maximise the growing area. I will also try to trellis all the vine type plants such as pumpkin and cucumber so as to take advantage of the vertical space. 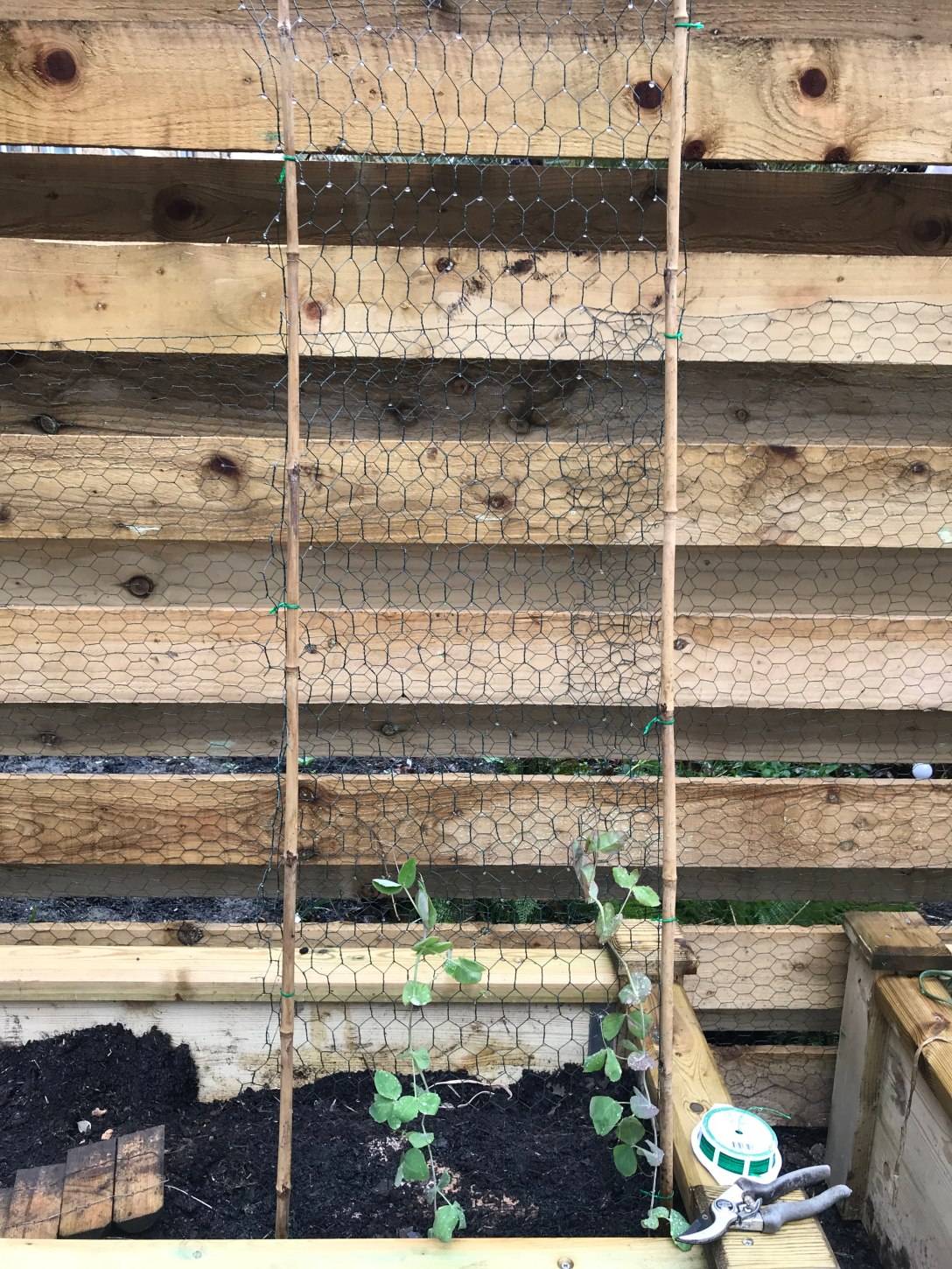 I have already planted out one crop of early potatoes but they are in bags so not taking up any of the current space.

The rhubarb and asparagus along with the strawberries were planted a while ago in the designated permanent perennial section of the bed; although they do say the only thing permanent is change.

I am not sure if it is better to describe or use drawings to explain the set up as my handwriting is an abomination. Here is the list of the seedlings that I have sown so far 2018 Seeds (the corn in the seedling pic is now two foot tall and thicker than a fat pencil)

The first bed has the most sun all day and there I will be planting six kinds of tomato at the back of the upper tier. This year, I am using the string method to ‘stake’ them as last year due to new born-itis, I was not able to spend any time pruning and they ran rampant. I had a lot of fruit but not much else grew in front/underneath that spot. On the edges of this bed I will be putting up trellis so the melons and cucumbers can climb up. (I am starting to think this needs to be shown in a picture or this will be the longest post of all time.)

The second half will have dwarf peas and bush courgette, next to the rhubarb and asparagus.

I just found the lost plan I drew up before planting anything and I see I have followed none of it. Not sure why I even bother to draw up plans in the first place. I guess it was something to do while I waited for the snow to melt.

The second bed currently has brassicas; cauliflower, broccoli and it will have kale and Brussels sprout. It is also inter-cropped with lettuce and spinach in the middle and last years leeks on the edge, waiting to be eaten.

The lower tier will have a succession planting’s of carrot, beetroot, and radish plus Swiss chard and celery and maybe parsnip if they ever germinate. I also will put the achocha here on a trellis so it can grow over the fence if it wants.

All the intercropping on the fact that if I run out of room the plants that have been placed in between the others can be harvested at any size such as baby spinach and Swiss chard or small carrot and beets.

I also am using the clump method rather than rows so can place clumps successively wherever I have space at the time. I have some cabbage and winter squash to put in later in the season.

This is going to be a lot of work to make sure I keep on top of the pruning and tying up but I think it will result in a very large crop of quite a good range of vegetables through out the season until Christmas.

I did draw up a plan but I am not sure if it any clearer that my description above – they say a picture speaks 1000 words but I think that is only if you can actually draw otherwise it just leave 1000 unanswered questions.

The first picture is the front bed – the question marks are probably going to be filled with successional crops. The second is the back bed closest to the brick wall, that gets a little less sun at this time of year I think. Each bed is around 0.5m wide and I marked out 0.5m along the length in pencil (so each pencil square is around 30cm by 50cm).

I am currently hardening off all my veggies as I write this and hope to plant out over the long weekend. Let me know what you think – speak now or forever hold your peace. (The ground is quite warm as my back garden is a heat trap (yesterday it was 16 in the shade) and we have no frost so hopefully should be ok). Fingers crossed.

6 thoughts on “Bed Plan – Planting out”