As it pours with rain outside I contemplate the success and failures of my garden so far. A lot of renovations were completed over the length of this summer and plants put in and taken out. I put in a new vegetable ‘patch’ and also a ‘I don’t quite know what to do with yet’ area in the new garden.

It has been a learning curve for sure and with the hottest and driest summer I have known for a while I present the unexpected and the overgrown parts of my back garden. 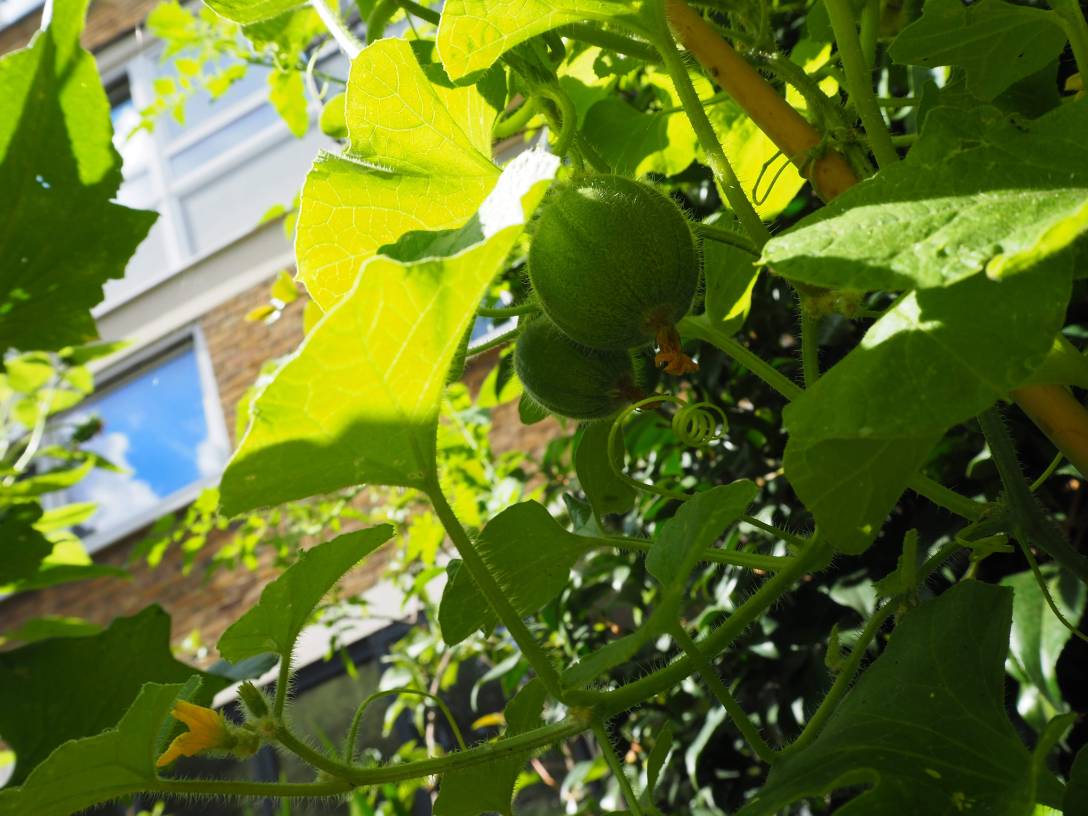 The first is an unexpected; the Minnesota melon that I planted way back in May has struggled throughout the season. First I thought it was too cold and then too hot and then too shady but finally it suddenly took off and now has two melons on one of the plants. I don’t know if we have enough warm weather left for them to ripen but it is a success even to have a melon on the vine. 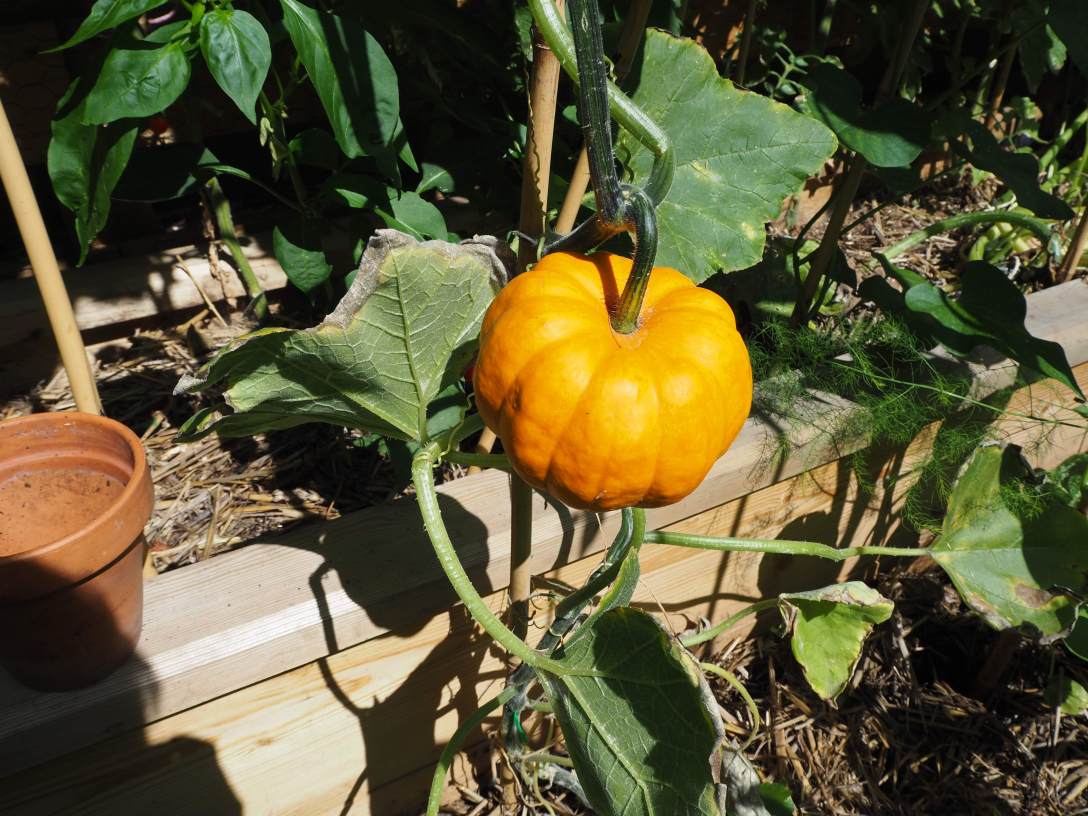 This pumpkin is quite a large ‘Jack be little’ and it is unexpected as it was struggling as well. The vines are supposed to be four to five feet long but suddenly it has grown like cra] zy and this pumpkin is nearly ready. Unfortunately, it is now shading the melon and next year I will have to reassess where I plant what as sunshine is a scare commodity at certain times of the season (neighbouring trees shade my garden depending on the angle of the sun) 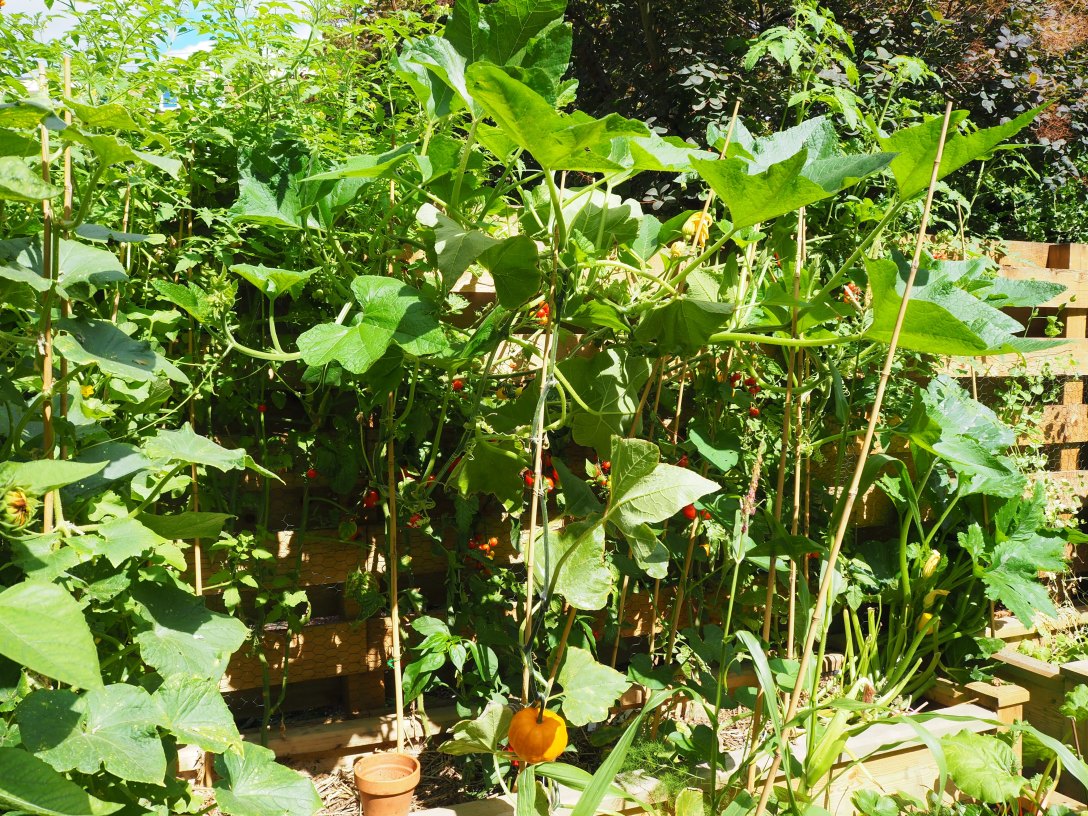 This is the offending vine; it is hard to tell but behind it are the tomatoes and the sun comes from the right of the picture and swings round the front of the picture (where you are reading) so the pumpkin leaves are shading everything. To the left is where the melon is behind the cucumber which is also (happily) overgrown; the pumpkin will be gone very soon. 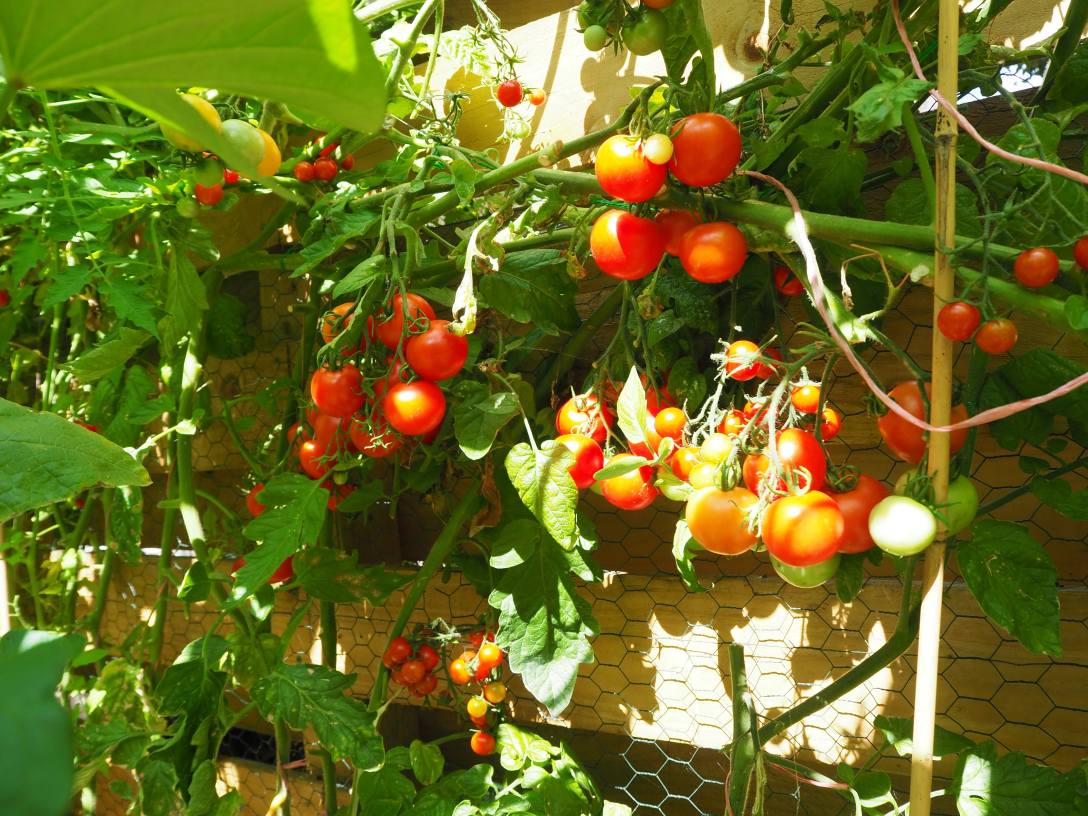 Tomatoes are gladly overgrown, now just waiting for them to ripen and I will make chutney and tomato sauce with them as you can only eat so much salad before they go off. 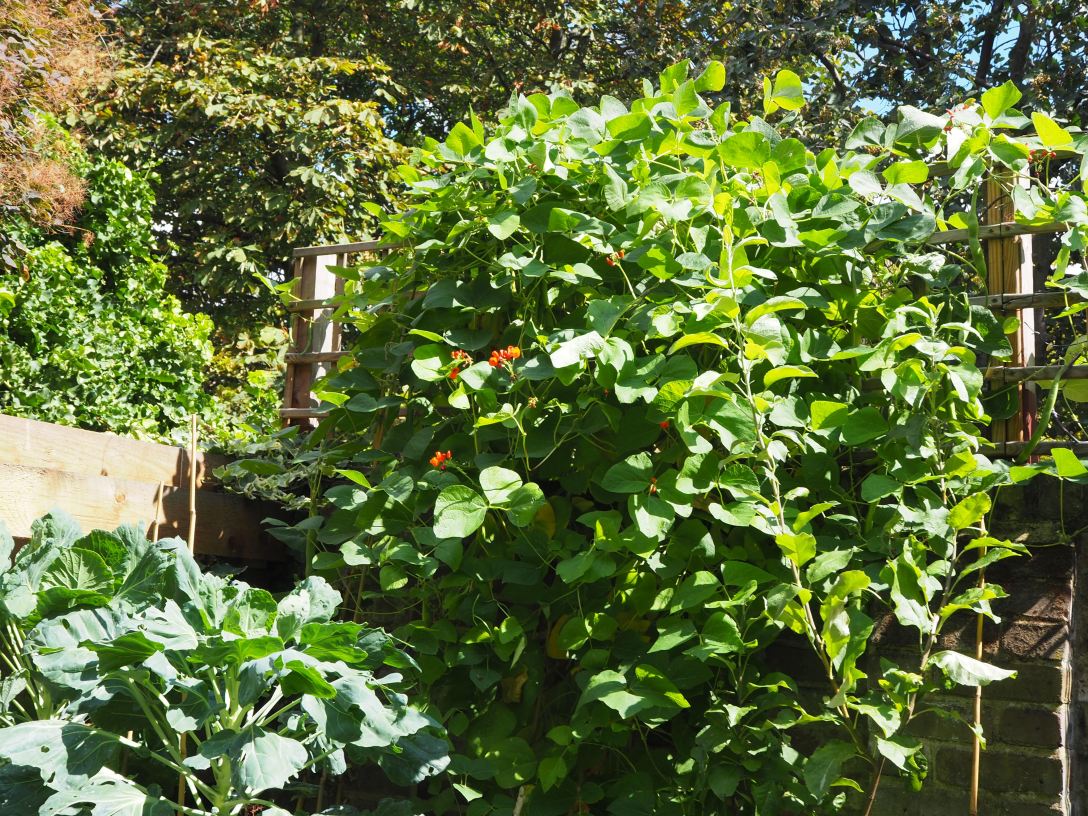 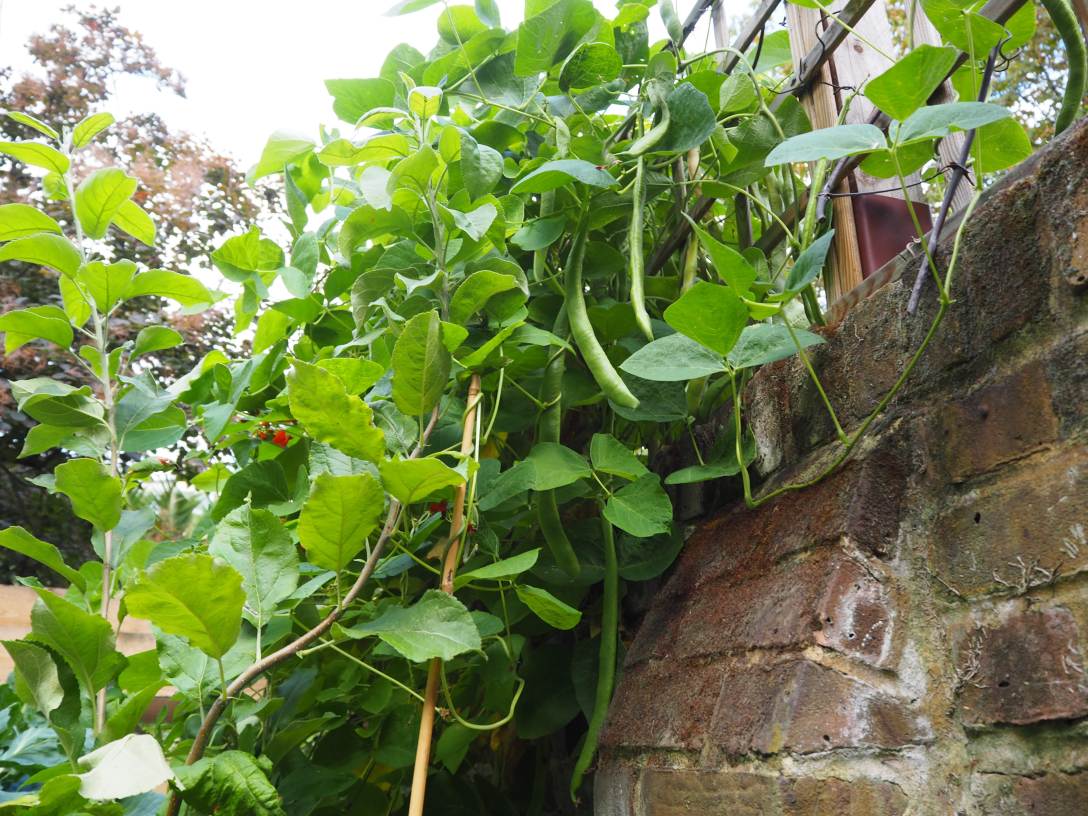 The climbing bean has become crazily overgrown and this was unexpected as I thought we would just sow two beans and then get a handful of beans for a couple of meals. Apparently not, we could not keep up with picking them so as they are not very nice if you leave them to grow; I have left them to spend their days fattening up and will harvest for ‘soup’ beans instead. Most of the bean pods are getting towards a foot long and they have bright pink beans inside. 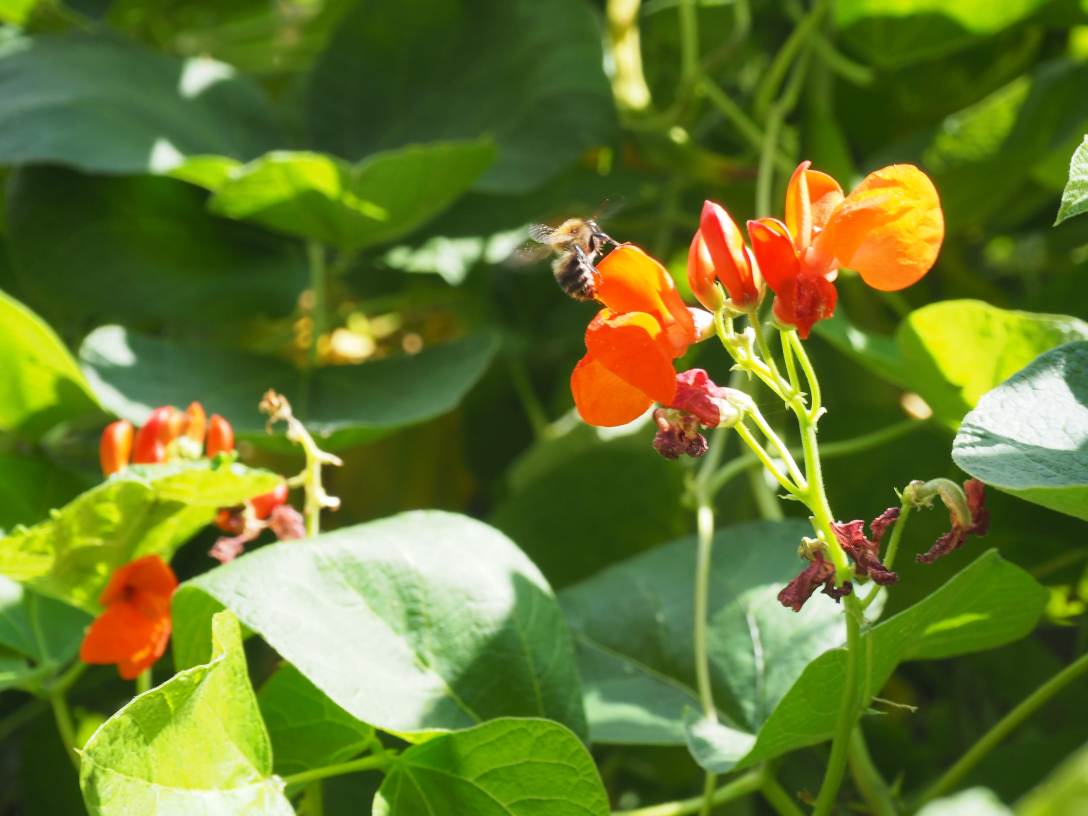 It is still flowering so I guess by the time the cold comes we will have eating beans and soup beans ready to harvest.

Potatoes are also growing very fast which I find unexpected only because I normally grow potatoes at the start of the year when they do not shoot up like this. I only planted these at the end of July so they are amazingly tall to me. 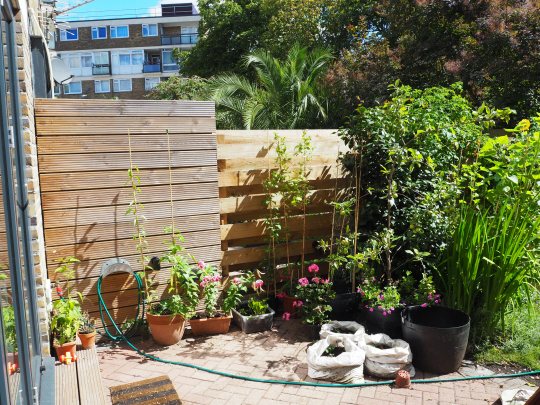 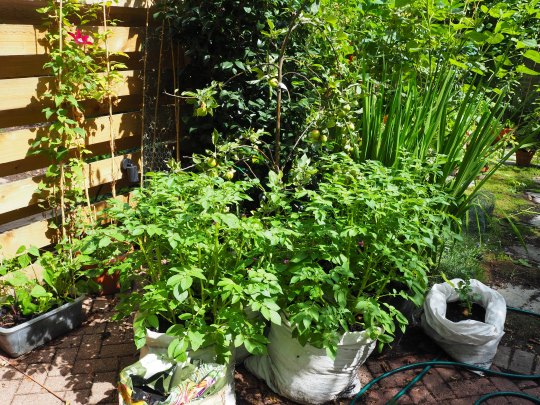 The final is my both unexpected and overgrown  physalis bush which is supposed to be a subtropical plant (mostly Central and South Americas). I assumed it would be a small plant with a couple of flowers and maybe some fruit that might be ripe eventually. It has many, many fruit on it and I have found two under all those branches that have a dried lantern. 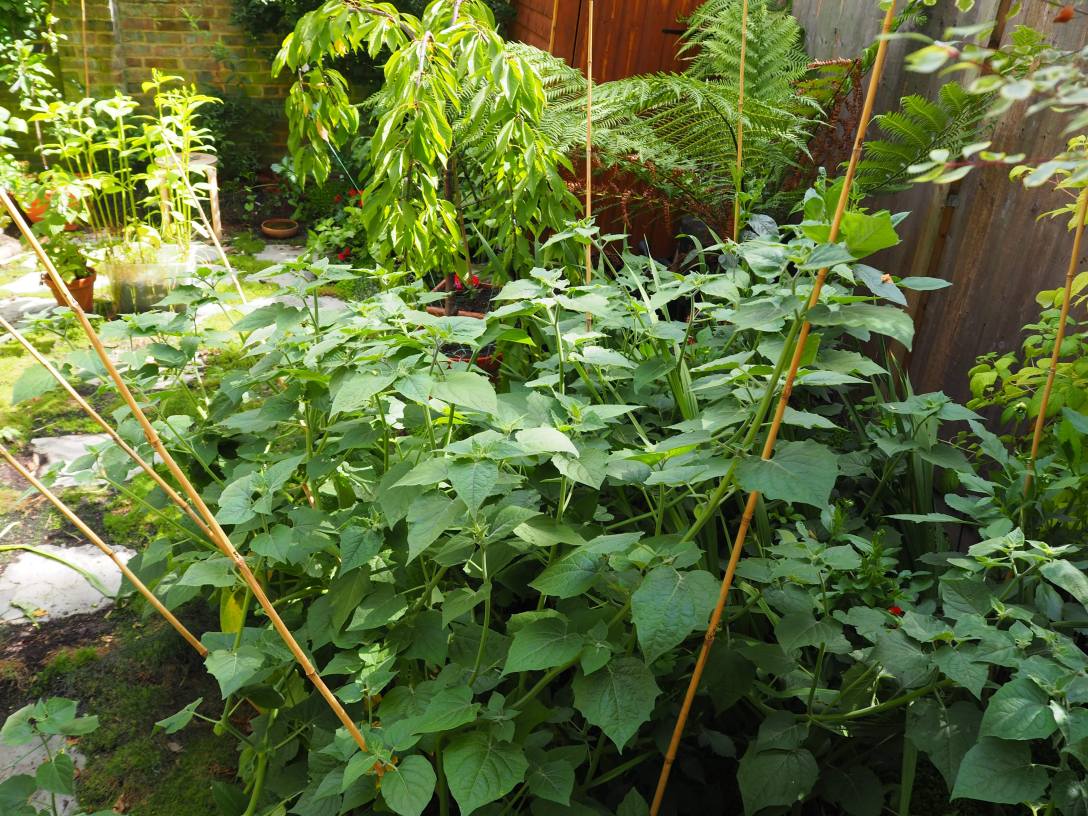 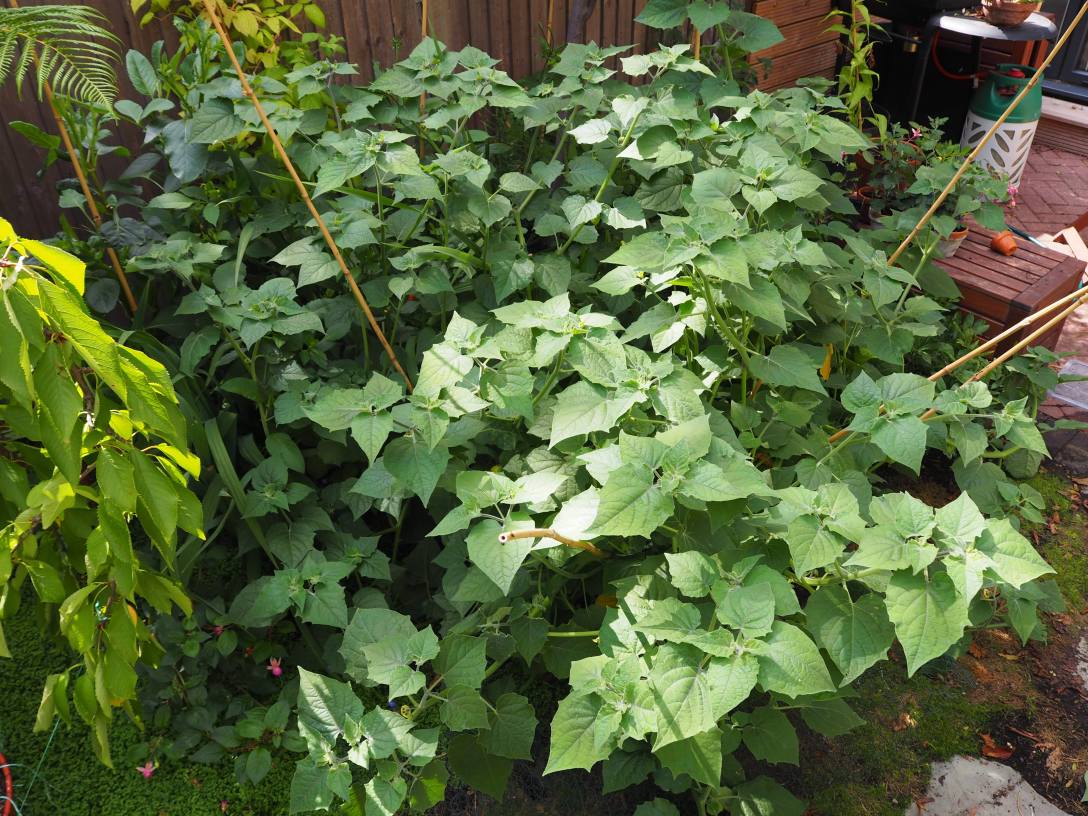 I picked them (I know you are supposed to wait until the fall to the ground) because I was impatient and found they were just ripe. They taste like pineapple tropical flavour but were quite tart. This plant is about six feet by four feet across and I have had to trim it back a few times. It has smothered my dahlias and the rest of the plants in the ‘I don’t quite know what to do with yet’ area. Needless to say that I won’t be planting this again perhaps if I find space in the allotment where it can stretch out properly.

Have you had some suprises overgrowings this season – what has been unexpected for you this summer (or winter)? I would interested to hear how your garden has been racing or stumbling along in the weather so far.

That is it for my Six on Saturday; head over to The Propagator to see more six on saturday growings on.

14 thoughts on “Six on Saturday: The unexpected and the overgrown”