Last week it was freezing and I did not feel like taking any pictures as I felt like the garden was at a stand still. I still feel this way but we can’t always have the perfect spring/summer garden or we would never enjoy the bulbs.

In temperate climates, sometimes I had to put tulip bulbs in the fridge for a while in order to trick them into thinking they had experienced a truly cold winter.

I don’t have enough room in my fridge for all the great spring bulbs available so I am glad in a way for the upcoming winter.

Here is my garden as it stands (or falls as the case may be): 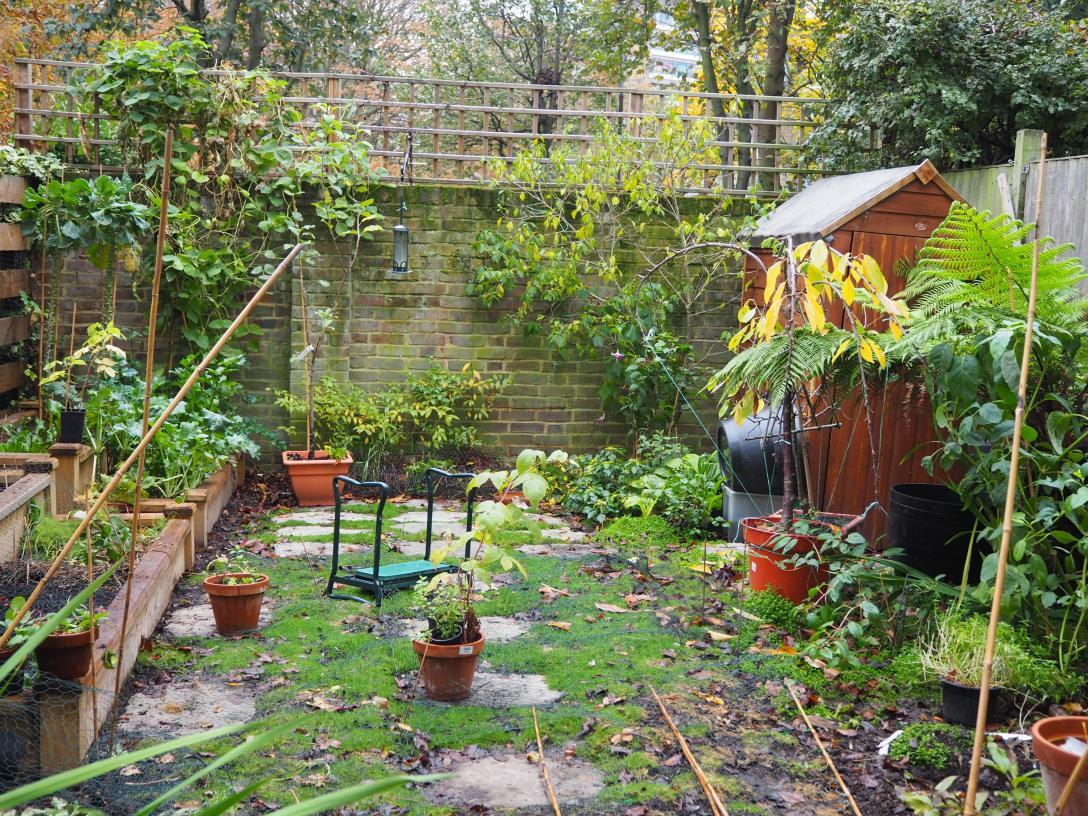 Yesterday I spent a couple of hours putting in bulbs throughout the garden so come spring before I can plant out anything else we will enjoy some flowers. Then covered everything in wire so the squirrels would not dig up my hard work.

I had an Epiphany to plant up the vegetable beds with early tulips and then move them out when it was time for tomatoes. 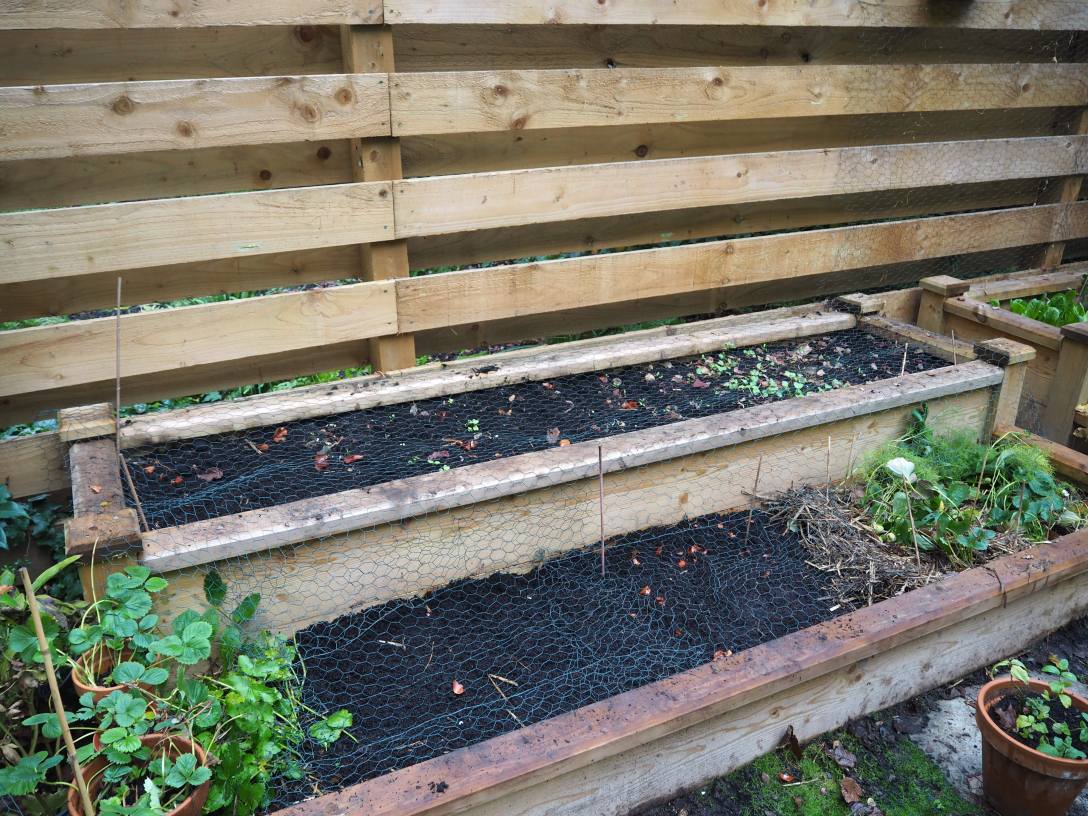 There are 120 tulips lurking beneath the surface of this vegetable bed. (and a handful of ‘King Alfred’ daffodils along the wooden borders)

I also put 100 crocus (Crocus Pickwick) in the ‘lawn’ area and where the peonies are. My theory is that the crocus can bloom and be done before the peony stems unfurl in to full foliage. 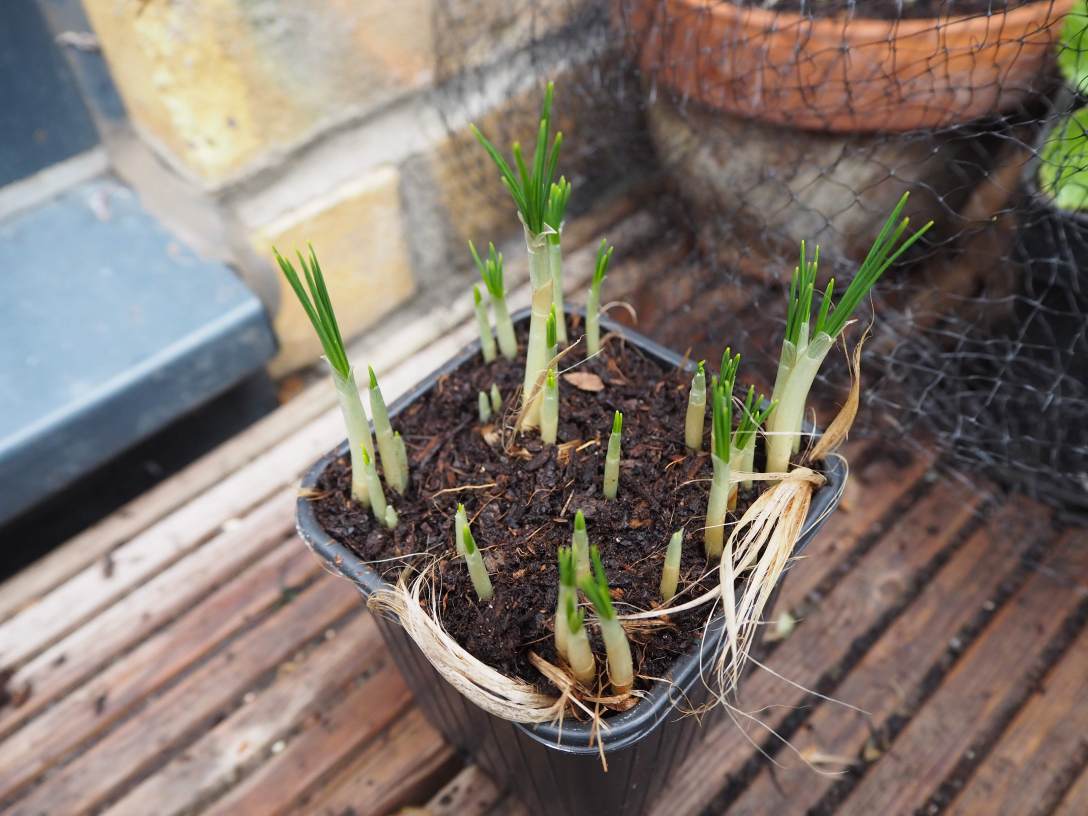 Speaking of crocus; I bought a bag of autumn crocus (Crocus sativus) which are the flowers that produce saffron threads. I have them sitting at the back door waiting for blooms so I can harvest quickly. Has anyone done this before? Any tips on harvesting, drying or storage that I must know? 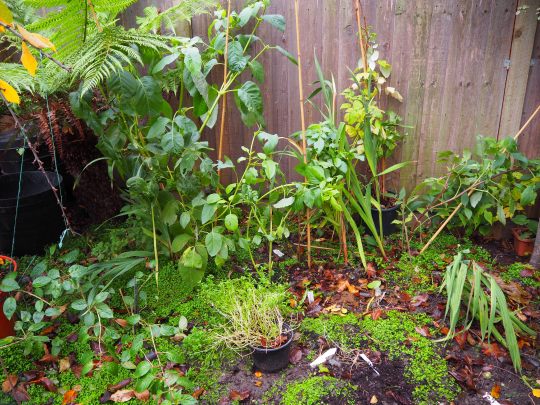 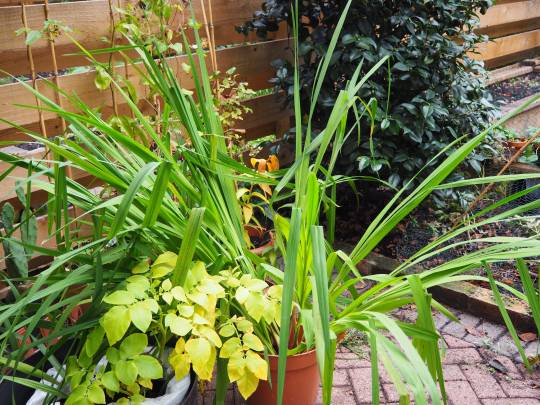 I removed half of the gladioli that blooms with the dahlia (the ‘I don’t know what to do with this yet’ patch) The patch was too crowded over the summer between the dahlia the physallis and quite a few gladioli. I will put them in the front to bloom next summer – I also lifted the gladioli murielae purchased from RHS – I was very disappointed because out of 40 bulbs all of them were blind. I will plant them in the front garden deeper this time and they will have reprieve hopefully. The foliage of both are quite striking so it will look good even if they don’t bloom.

Speaking of Dahlia – I need help. I have them still growing in the picture above and, they show no signs of dying down. Everyone is tweeting about frost and blackened leaves and I should be grateful I don’t get frost. However, I would like to cut them down but will they be hindered by that. They are looking scraggly and floppy and they are spindly because of the lack of light; next year I will stake them properly. What will happen if I cut them down? Anything? Do they have to be frozen or something in order to reappear? I know they dig them up in San Francisco and I think it is before any sign of frost. Please let me know what you think. 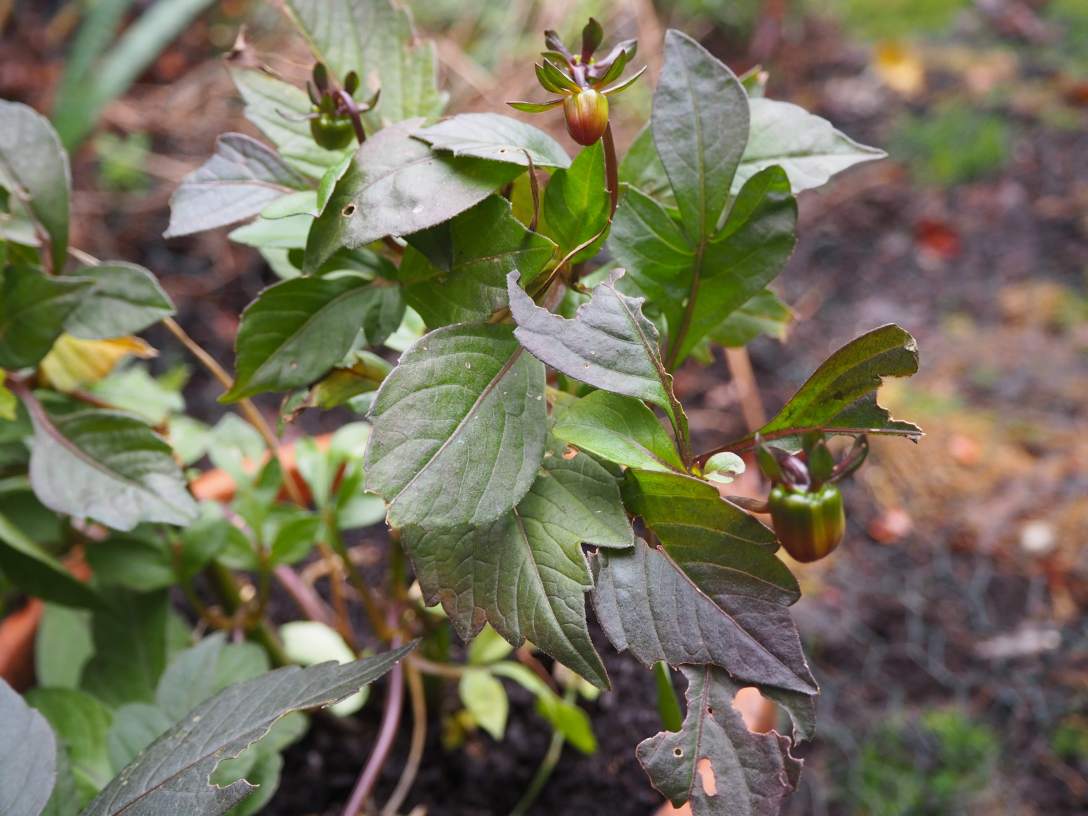 This black foliage dahlia is still blooming despite the over night temperatures of 2-3 degrees. 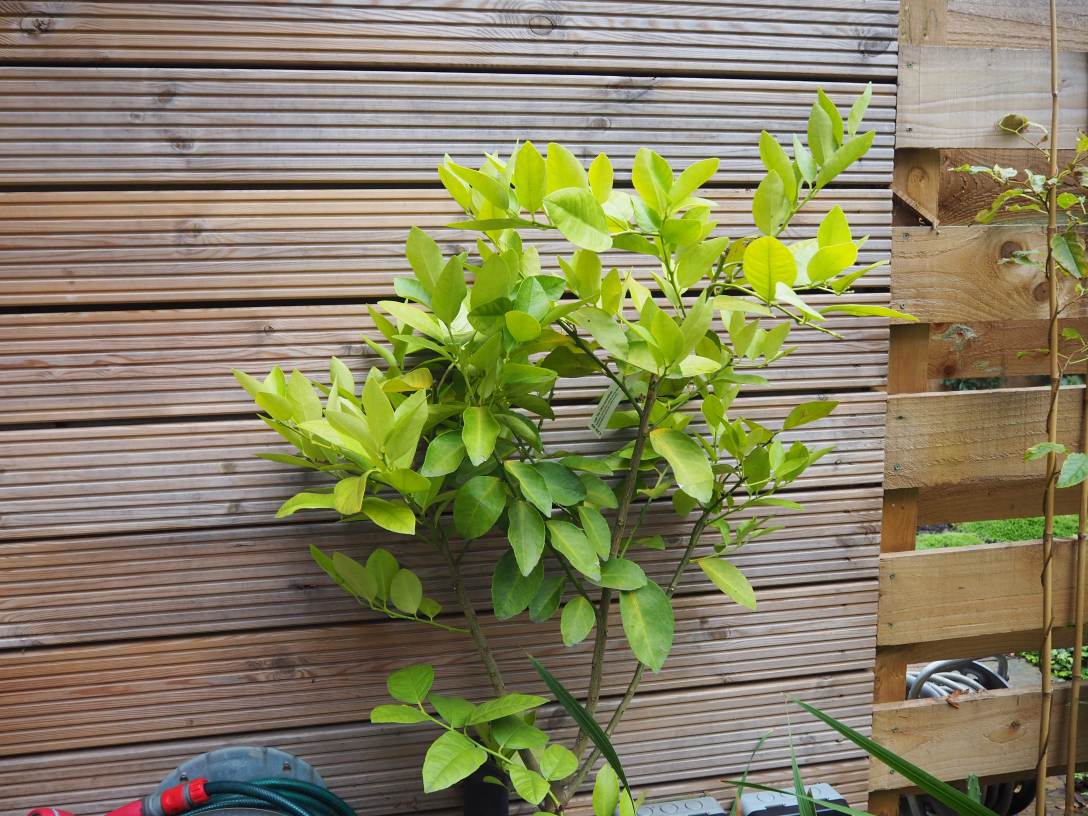 Another question; this lime tree was kept in a green house at 10 degrees last year (before I bought it from the nursery)- I don’t have a green house so it will winter outside. Do people have citrus outside? What kind of temperatures do they survive at? I have a friend who said her lemon tree survives outside – the leaves fall off but it just sprouts again in the spring. I know that different citrus have different levels of hardiness. I think we don’t get much frost and we are already getting cold nights probably down to zero in Jan/Feb (or colder if a beast visits again). What do you think? I have bubble wrap but not sure how to go about it. 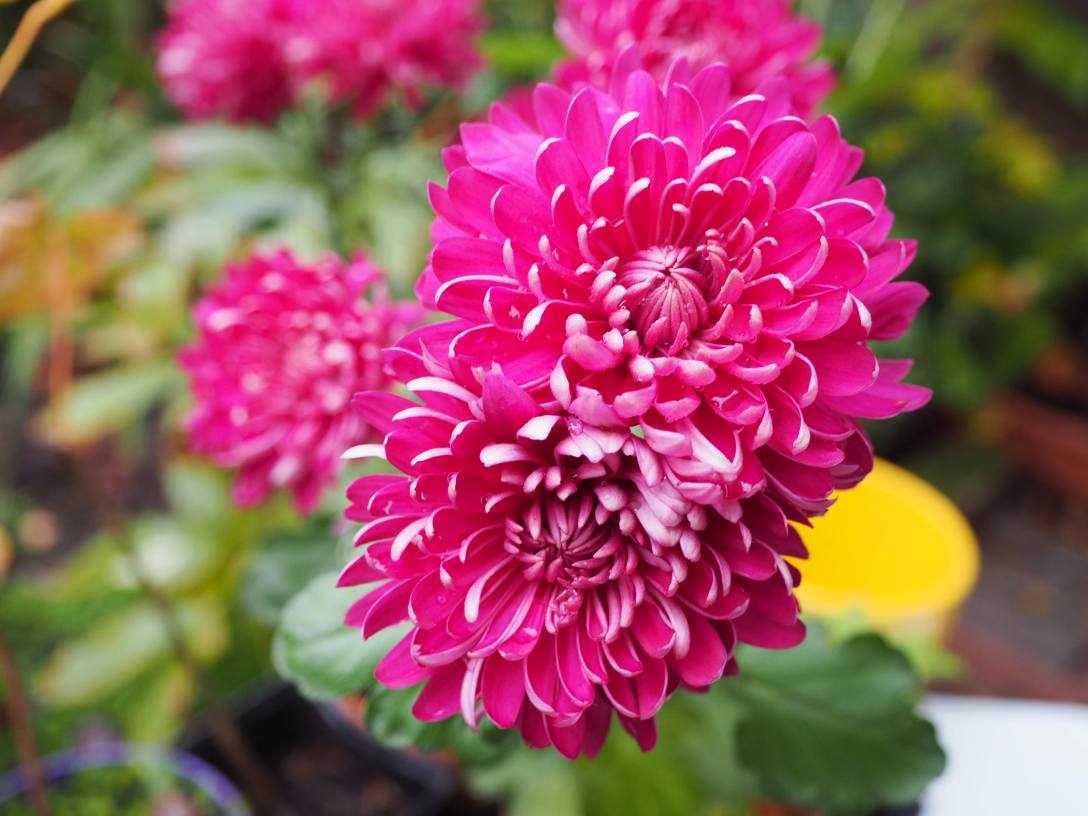 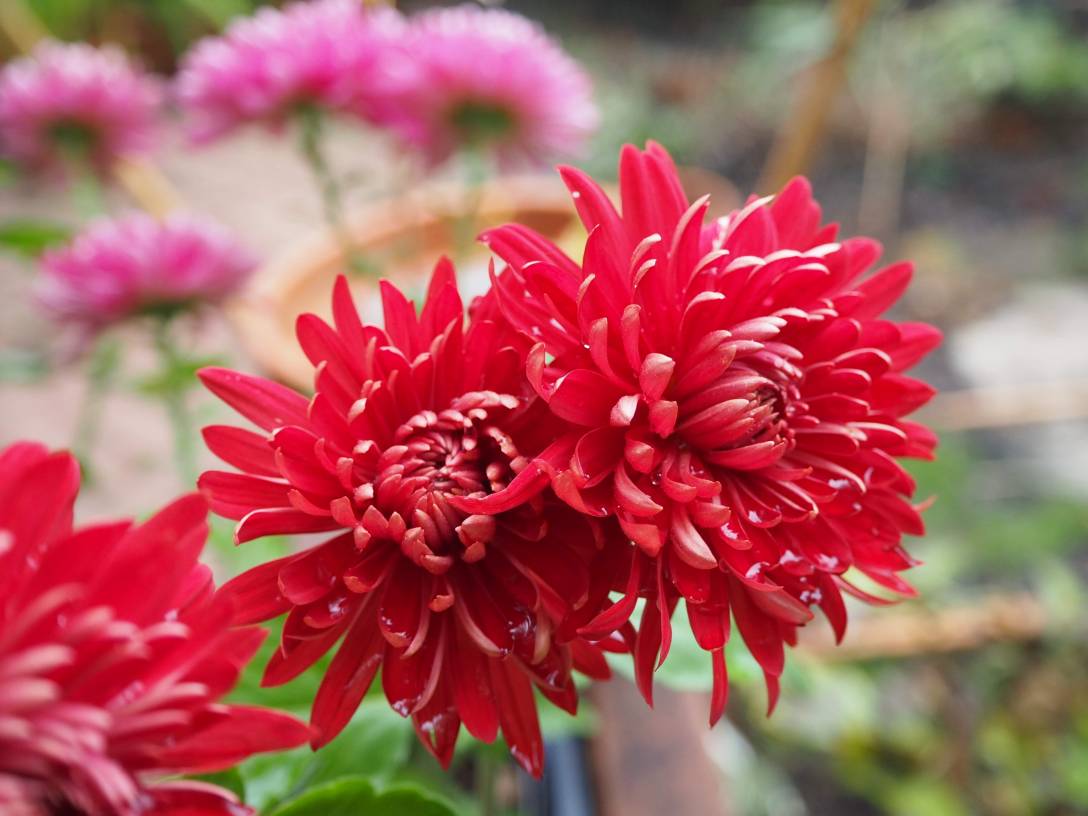 Lastly, ending on a good note; the chrysanthemums I purchase from Hampton Court RHS have turned out to be two different colours after all. I have two purple and one red blooming. The second red one was knocked over by a squirrel and broken at the back so died. They’re definitely not show quality as I think they only have a couple of blooms allowed to grow giant but it is nice to have a bit of colour this late in the year. I will keep chrysanthemums around if they are not the typical pink or white that you get at the supermarket.

I still have late tulips to buy – I am running out of room so they may end up in pots – you can’t really have too many tulips. I also have a pack of 100 mixed early tulips for the allotment that I will plant this week.

I hope you can answer the questions with a little advice or comiseration if you have the same problems. Next week, seems less cold as the middle will get up to 16 degrees they say, so hopefully you enjoy the weekend and following week what ever you get up to.

Head over to The propagator for more six on saturday fun, catch up with gardeners from around the world and all climates.

23 thoughts on “Six on Saturday: Nothing going on (Questions)”